The Arc Patrimonial, or "Heritage Arc", is a project that links the main historic and artistic points of interest in the village of Santa Coloma and shows visitors the most important elements of our heritage here in Andorra. The route, which runs between the villages of Santa Coloma and La Margineda, mainly passes along old trails.

Santa Coloma sits in a special setting, as the entrance to one of the most significant concentrations of monuments in the country, with iconic spots like Santa Coloma Church, the Torre dels Russos and the archaeological area of Roc d'Enclar.

The examples of local heritage on this route make up a diverse, varied tour that can start wherever you want and follow your desired order. 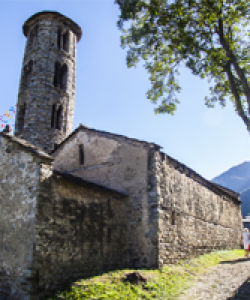 The Santa Coloma Church, one of the oldest in the country, is a real gem of Andorran Romanesque heritage. Located in the village of the same name, this church was built in several architectural phases. The nave is the oldest part, of pre-Romanesque origin, dating from the early-10th century, or perhaps even earlier. In the 12th century, the 18-metre-high cylindrical bell tower was added. The church was decorated with one of the richest, vastest pictorial collections in Andorra. Although these paintings were removed from the building around 1930, after travelling around Europe during the Second World War, they were finally recovered by the Andorran government in 2007. Today, inside the nave, visitors can admire an Agnus Dei and the remains of some decorative friezes, which had been hidden behind a Baroque altarpiece and were discovered during a restoration in 1934. The relatively intact urban surroundings and the well-preserved scenery of the Enclar mountain range as a backdrop makes this church's setting particularly beautiful. 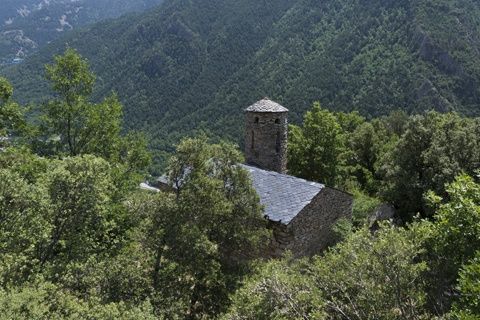 Around 150 metres above the Santa Coloma plain is the granite promontory of Roc d'Enclar, which holds a wealth of information about the history and evolution of Andorra. Nowadays, all that remains of the fortified area is the Sant Vicenç d'Enclar Church, the oldest church in the country, built in the 8th century. Roc d'Enclar is also the entrance to one of the most ecologically rich spaces in the parish: the Vall d'Enclar. 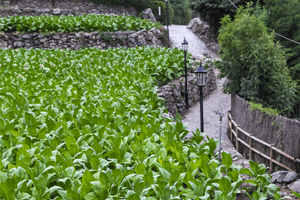 Apart from the iconic Santa Coloma Church, the village is home to a series of traditional buildings, which give an idea of what Santa Coloma looked like at the beginning of the 20th century. As you walk along the village's streets, buildings like the Casa Riberaygua stand out for their cultural value and excellent conservation. 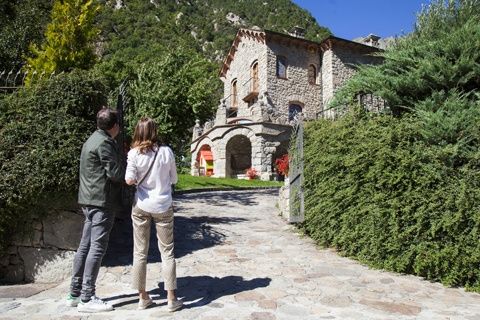 The Torre dels Russos is a privately owned building constructed in 1917. It was restored in 1997 and constitutes one of the country's best examples of granite architecture. The house was a project by the architect César Martinell, one of Antoni Gaudí's students. It is probably the first building in Andorra designed by a prestigious architect. Although its architecture is more aligned with the Noucentisme movement, it bears some Modernist elements, especially in its ornamentation. 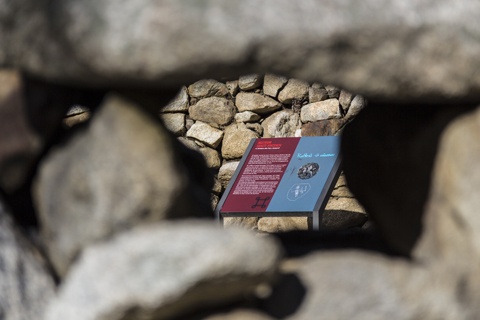 Heading south from the village of Santa Coloma, we find the largest archaeological settlement in Andorra and one of the most spectacular in the Pyrenees. Some 1500m² of Roureda de la Margineda have already been excavated, and there are still 3000m² left to be studied. The various excavation campaigns carried out since 2007 have revealed thousands of medieval ceramic, iron and bronze objects. The Sant Vicenç d'Enclar fortress, built around 1190 by the Viscount of Castellbò, is part of the main excavation phase. Guided tours to see the monument are available. 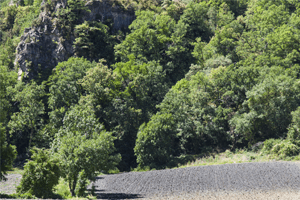 The highest point of the route is at the La Margineda viewpoint: a small, rocky promontory, which looks over the whole trail and offers excellent views over the valley.

La Margineda is the southernmost village in the parish. The path, which passes through the middle of the village, shows examples of old local architecture and rural scenery that gives a glimpse of the area's traditional economy.

Balma de la Margineda was the scene of man's first steps in these valleys and is a big question mark in Andorran heritage. This mysterious setting was home to hunter-gatherers between 10000 and 4000 BC. But it is not just an iconic settlement for Andorra; it is a great source of information for all of the Pyrenees. It is located five minutes on foot from the Rotonda de la Margineda roundabout and is perfectly visible from the road.

The new bridge at La Margineda traces the road that joined Andorra with La Seu d'Urgell, opened in 1914.

The Pont de la Margineda is Andorra's most iconic medieval bridge and one of its most recognisable monuments. It is found on the old road that linked Andorra la Vella and Sant Julià de Lòria. Despite being built around the turn of the 15th century, it is not strictly Romanesque, as it was not built using the techniques characteristic of this style. It measures 33 metres in length, with a coping arch of 9.2 metres, and provides passage over the Valira River, the country's main watercourse. Next to the bridge stands a modern sculpture by Valencian artist Andreu Alfaro, made to commemorate the 2nd Congress of the Catalan Language. 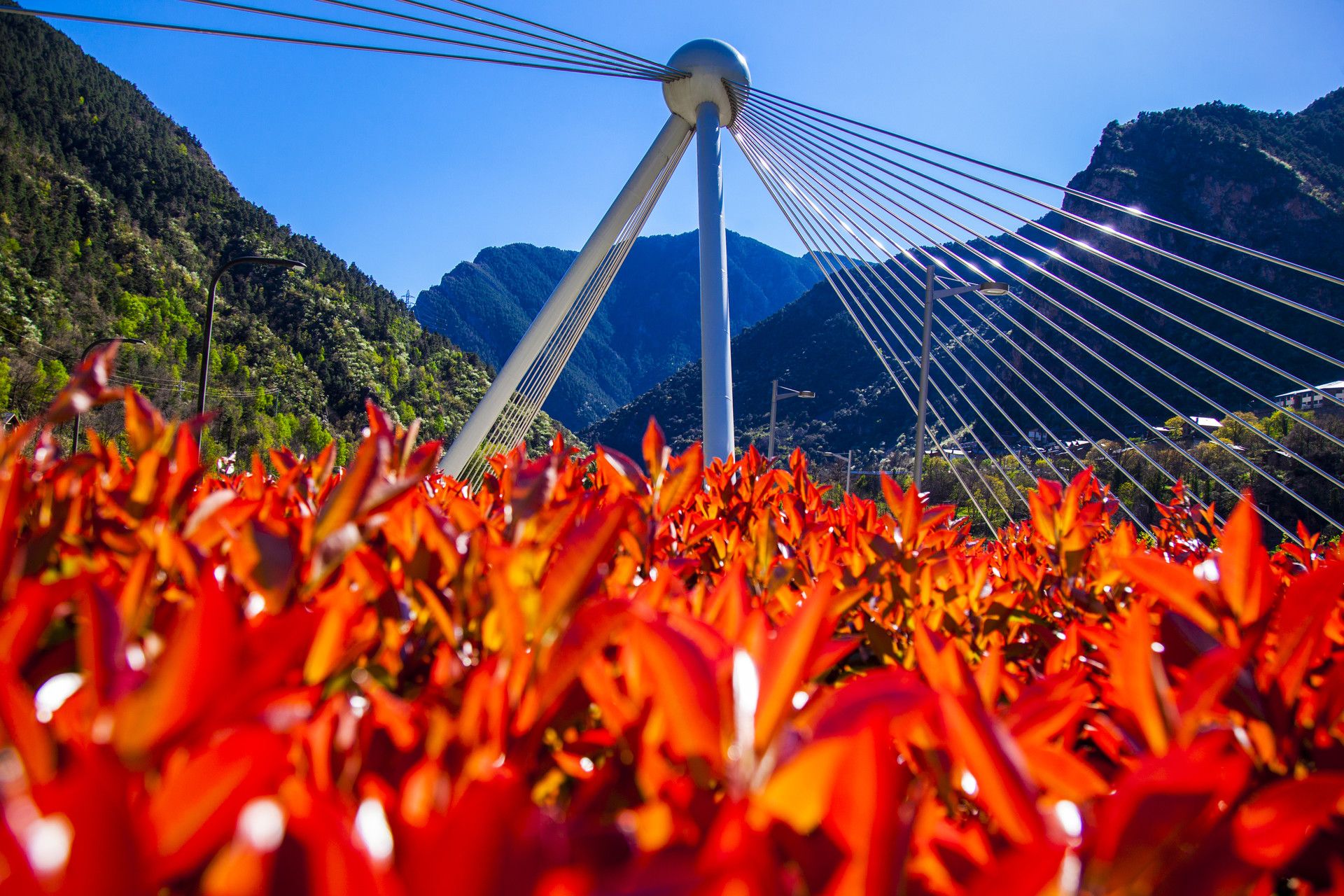 The Pont de Madrid bridge is one of the most distinctive engineering projects in the country. Thanks to its proximity to the Pont de la Margineda, just 300 metres away, it highlights the contrast between traditional and contemporary Andorra.