For more information about Andorra la Vella and Andorra as a whole, pay a visit to the Tourist Office:

The parish of Andorra la Vella is the highest capital city in Europe, just at the right altitude for the body to adapt to the new environment quickly. This and the climatic conditions make the parish ideal for sports.

This circular circuit with over 1,000 metres of incline takes the visitor on a journey around the area of Claror-Perafita, within a National Park declared a UNESCO World Heritage Site. Some stretches follow the signposts of the GRP route.

From Prat Primer down to the Claror shelter, you might be able to hear and, with a bit of luck, see, some marmots. From there, the route follows the GRP along the Estany de la Nou path, where the Pic Negre mountain comes into view.

The Estany de la Nou is quite unusual as, unlike most lakes in the Pyrenees, river water flows there. It is fed by the phreatic waters that run underground and come to the surface as a stream near the Perafita River, which means that it always maintains its water level. It is the southernmost lake in the Principality and the warmest.

Located in the southeast of the parish of Andorra la Vella, Prat Primer is a circular trail of a high difficulty level, due to its incline (more than 900 metres). It begins at the La Comella picnic area, then follows along the signposted path through the Palomera Forest: a deciduous forest with downy oaks, boxes and common dogwood, as well as birds like the robin, blackcap, blackbird and blue tit.

On the wooded, gentle slope over which this route passes, there are three rivers: the La Comella, the Forn and the Prat Primer, the latter of which runs through an incredible glacial valley. All of these watercourses are part of the basin of the Valira River.

This is a nearly 25 km trail, where you can discover the Enclar mountain range, ascending via the sunny slope of Bony de la Pica up to the peak of Enclar, then descending the shaded Sispony side. You can discover the old trails that joined together the main Andorran urban centres until arriving back at the starting point: Santa Coloma. This route is for people in good physical condition who are experienced in long trails on irregular terrain with steep slopes.

Despite being a little-known and therefore little-frequented route, it is a trail with stark contrasts that passes along a stretch of the popular GRP route (which forms a loop all the way around Andorra).

The Enclar mountain range, located in the southwest of Andorra, just above Andorra la Vella, is quite unusual in comparison with the other mountains that surround it. It is made up of mainly metamorphic rocks, especially schist, which give it its characteristic reddish tone. This colour contrasts with the block of green created by the evergreen oak forest that stretches out over its sunny slope.

This is an interesting route as you’re within one of the buffer or peripheral zones close-by the Madriu-Perafita-Claror Valley, the greatest example of cultural landscape of Andorra and one of exceptional universal value, hence in 2004 the area was declared a UNESCO Cultural Landscape World Heritage Site.

To reach the starting point, take the Comella road (CS-101) from Andorra la Vella and follow it until reaching kilometre 4. Turn right at the intersection for the Comella Parc Residential Area. Then you’ll come to a small car park where you can park your vehicle. Next to the car park you’ll find an information sign for the Prat Primer path. (42º 29' 54.474", 1º 31' 49.6626")

The GR7 is a hiker’s grande route that crosses the Pyrenees from south to east.

The GR7 forms part of the European Grande Route E4 from Greece to Gibraltar. It covers 40 km on its way through Andorra. It enters the country from France through Portella Blanca (alt. 2,521) and crosses the principality to Catalonia, dropping out of Andorra through the Farga de Moles (alt. 850).

Access the Map of shelters and long distance trails in Andorra here .

DOWNLOAD THE MAP OF SHELTERS AND LONG DISTANCE TRAILS

The tough mountain passes, the spectacular landscapes, the richness of the cultural and natural heritage and the many options
offered in the country are, without question, the main attractions for cycling tourism in Andorra.

Although this is a very short mountain pass, it has been included in renowned cycling races due to its incline, including Catalan Cycling Week, the Vuelta a España and the Tour de France.

With an average incline of 8.1% and ascent of 348 metres, this route heads up the CS-101 until arriving at 1,347m altitude, the highest part of La Comella.
This route is highly recommended, thanks to the diverse flora and fauna visible along the ride and the spectacular views at the end.

With an average incline of 5.8% and ascent of 238 metres, the Tourist cycle trail 17 arrives at La Comella from the parish of Escaldes-Engordany, via the CS-101. This is a moderately difficult route that peaks at 1,347 metres altitude, at the spectacular La Comella viewpoint.
Breathtaking scenery awaits your arrival! 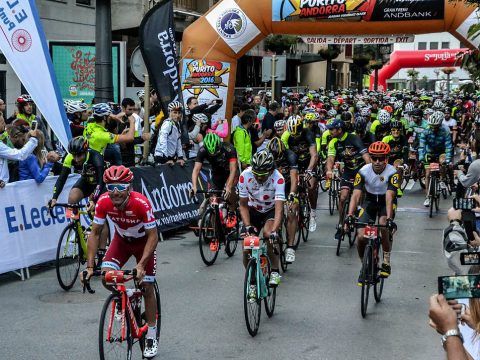 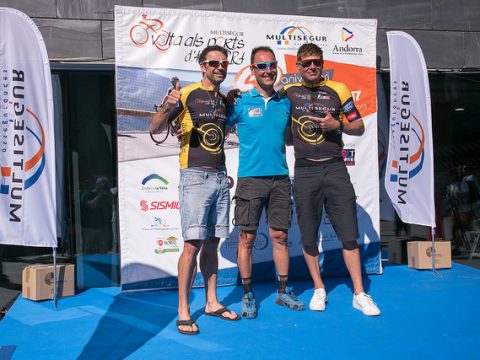 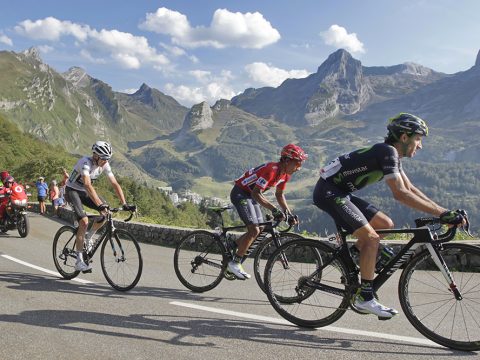 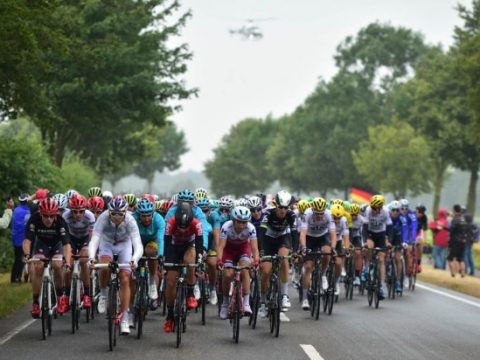 Climbing routes and via ferrata

This is the location with the most climbing routes in the whole country. It is at an altitude of 1,100 m, in the south, southeast. Climbing is possible all year round. There are 4 climbing sectors: Cementiri, Bigabloc, Esfinx and Santa Coloma.

How to get there: Going down Avinguda Santa Coloma towards Sant Julià de Lòria, turn onto the road towards the cemetery. Take the path leading from the right-hand corner of the car park, leading to the foot of the wall.

This is an impressive wall 150 m high, at an altitude of 1,200 m. in the southwest of the country. Here you can enjoy this sport all year round and also enjoy the sun which shines all day.

How to get there: Going down Avinguda Santa Coloma towards Sant Julià de Lòria, turn towards Carrer Gil Torres and follow the path marked with yellow points.

This is a fairly flat rock located towards the northeast. There are only 3 climbing routes. We recommend choosing fairly dry days, as there is a lot of surrounding vegetation.

How to get there: Take the path of the Obac irrigation channel from Avinguda Tarragona, and after a hundred metres you find the path which leads to the climbing routes.

At the start of the path going up to the Roc d’Enclar, which is accessed from the Carrer dels Barrers in Santa Coloma, there is also the start of an 270 m long iron way, with al the equipment needed to ensure an amazing climb. It is essential to have a hard helmet, harness, dissipator and proper footwear.

“You undertake this activity at your own risk and responsibility. Do not use the via ferrata in bad weather. Before starting, check the weather forecast. Keep yourself systematically secured to the cable. Avoid crowding on the vertical parts.“ 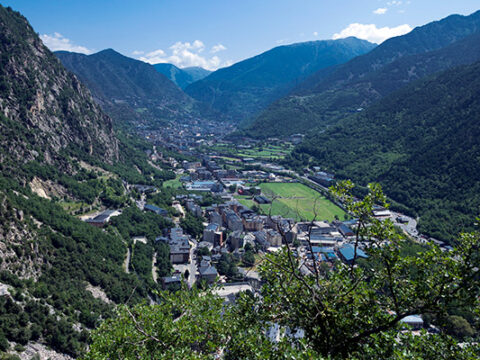 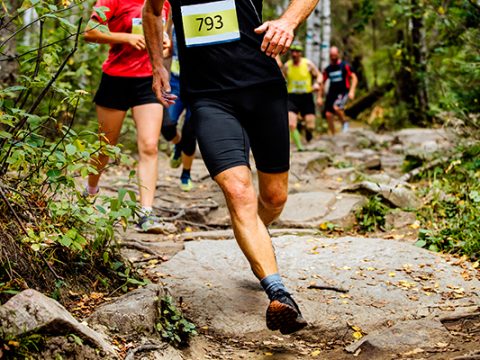 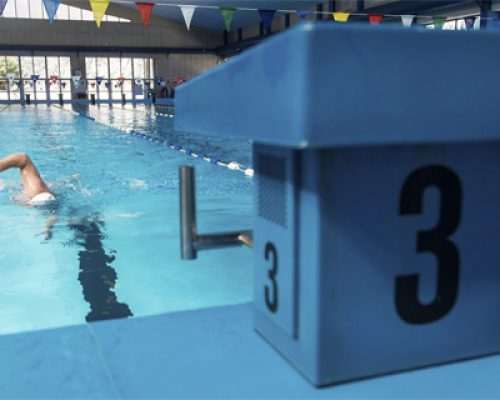 For short sports trips or training to move down from higher to lower altitudes, Andorra la Vella has the perfect facilities, including the Olympic pool at Els Serradells Sports Centre.

The facilities, located in a luxury hotel complex, make Andorra la Vella an excellent international sporting hub. What is more, the sub-Mediterranean climate and the altitude of the Estadi Comunal stadium, Olympic pool and walking trails are ideal for training. Just a few minutes from the city, you will also find two of the biggest ski resorts in the Pyrenees, a cross-country skiing resort, and the rest of the country waiting to be discovered!

The Serradells Sports Centre was built in 1991 for the Games of the Small States of Europe. The facilities have been extended in recent years. There are an Olympic swimming pool, a teaching swimming pool, an outside swimming pool for the summer, all of them currently out of service due to a fire occured in 2018.  Also available are a covered pavilion of 45 x 23 m, three squash courts, an open tennis court and five covered paddle courts. There are also a gym for body building, four fitness rooms, an artistic gymnastics room, an area for water and relaxation, and a target shooting range. There is also a sports medicine centre and a car park.

This amenity, located in Avinguda de Salou, has a six-lane athletics track, a grass football field 100 x 65 m, two areas for long jump, high jump and pole vault, and an area for weight putt. There is also an open multipurpose games court of 40 x 20 m, and a covered pavilion, also 40 x 20 m. The car park and bar are supplementary services.
This venue plays host to matches in the first and second national football divisions, the Copa Constitució and the Andorran Supercopa competitions.

Close to the Andorran sports centre, this was, in 1971, the first of the existing sports facilities to be built in the parish. 22 November 2014 was the date of opening the new National Stadium, with capacity for 3,315 spectators, for football and rugby.

This multipurpose area, located on the Baixada del Molí, is designed for various team games at high competition level (basketball, volleyball, six-a-side football, skating, etc.) as well as other individual sports, such as rhythmic gymnastics, judo and karate.
At the end of September 2014 the remodelling of this facility was completed, following the requirements for adaptation to the ACB league.

This multipurpose space, an annex to the Andorra sports centre, is for basketball, six-a-side football and volleyball, as well as other individual sports.

This amenity is next to the Congress Centre. The area (35x15 m) is equipped with tatami for judo, karate and other martial arts as well as for gymnastics.

The ground floor of the Els Serradells sports centre is home to Andorra's Precision Shooting Club.
Its facilities include two shooting rooms, the first of which offers 13 booths 25 metres from the target and hosts training and competitions with firearms, including standard pistols, rifles, air guns, muzzleloaders, large-calibre guns and 22 LR rifles. The second is for pneumatic weapon shooting and has 16 shooting booths.

For all lovers of snowboarding, freeskiing and skating, Andorra la Vella has the perfect venue for improving, practising and learning all these sports in the safest conditions.
It is an enclosed space that is open all year and perfect for both beginners and professionals, young and old.

The safety application that in the event of emergency allows users to send their exact location to the rescue teams.

For more information about Andorra la Vella and Andorra as a whole, pay a visit to the Tourist Office: